This is for those virtue signaling folks feeling they’ve just done something really great by getting that jab and feel the need to post it everywhere. I don’t think they’ll care to read facts, rather choosing to let their God of fear guide their decision. In my mind, from doing months of research on the topic and researching sources, there’s no way on God’s green earth this ol’ man will ever get this hellacious concoction put in my body. I actually pity those who out of ignorance believed all of the advertised fear porn produced by government & their media cronies. But that’s for God to judge not me, although I do reserve the right to judge and to determine what I think is right from wrong as we are directed in Corinthians, and I do think getting this stuff put in your body out of fear is wrong.

This may be the most important document ever written about the Covid-19 vaccines.

Since the start of the COVID-19 outbreak, the race for testing new platforms designed to confer immunity against SARS-CoV-2, has been rampant and unprecedented, leading to emergency authorization of various vaccines. Despite progress on early multidrug therapy for COVID-19 patients, the current mandate is to immunize the world population as quickly as possible. The lack of thorough testing in animals prior to clinical trials, and authorization based on safety data generated during trials that lasted less than 3.5 months, raise questions regarding the safety of these vaccines. The recently identified role of SARS-CoV-2 glycoprotein Spike for inducing endothelial damage characteristic of COVID-19, even in absence of infection, is extremely relevant given that most of the authorized vaccines induce the production of Spike glycoprotein in the recipients. Given the high rate of occurrence of adverse effects, and the wide range of types of adverse effects that have been reported to date, as well as the potential for vaccine-driven disease enhancement, Th2-immunopathology, autoimmunity, and immune evasion, there is a need for a better understanding of the benefits and risks of mass vaccination, particularly in the groups that were excluded in the clinical trials. Despite calls for caution, the risks of SARS-CoV-2 vaccination have been minimized or ignored by health organizations and government authorities. We appeal to the need for a pluralistic dialogue in the context of health policies, emphasizing critical questions that require urgent answers if we wish to avoid a global erosion of public confidence in science and public health.

Link to entire Article is here. I’ll only highlight a few quotes that stood out for me….

Guess the covid cultists missed this one too, …Another critical issue to consider given the global scale of SARS-CoV-2 vaccination is autoimmunity. SARS-CoV-2 has numerous immunogenic proteins, and all but one of its immunogenic epitopes have similarities to human proteins [27]. These may act as a source of antigens, leading to autoimmunity [28

Yeah, guess those who worship fear aren’t concerned about this either, ….It has now been proposed that vaccination with ChAdOx1-nCov-19 can result in immune thrombotic thrombocytopenia (VITT) mediated by platelet-activating antibodies against Platelet factor-4, which clinically mimics autoimmune heparin-induced thrombocytopenia [29]. Unfortunately, the risk was overlooked when authorizing these vaccines….

Oh yeah, something else for those fearporn loving mindless wokefolk, about children getting the vax,…There is a lack of scientific justification for subjecting healthy children to experimental vaccines, given that the Centers for Disease Control and Prevention estimates that they have a 99.997% survival rate if infected with SARS-CoV-2. Not only is COVID-19 irrelevant as a threat to this age group, but there is no reliable evidence to support vaccine efficacy or effectiveness in this population or to rule out harmful side effects of these experimental vaccines.... not sure wokefolk wanna hear that, truth doesn’t seem to be able to penetrate their shell of fear.

Also, at the end these questions need to be asked,

So some thought should be given if you haven’t gotten the jab yet, and moreso if you’ve already done so because out of believing the fearporn you’re allowing yourself to be an experimental piece of meat for big pharma, possibly exposing yourself and others to more danger that some virus that has a 99% + survival rate is most groups. So enjoy the butthurt when truth slaps your hind quarters. 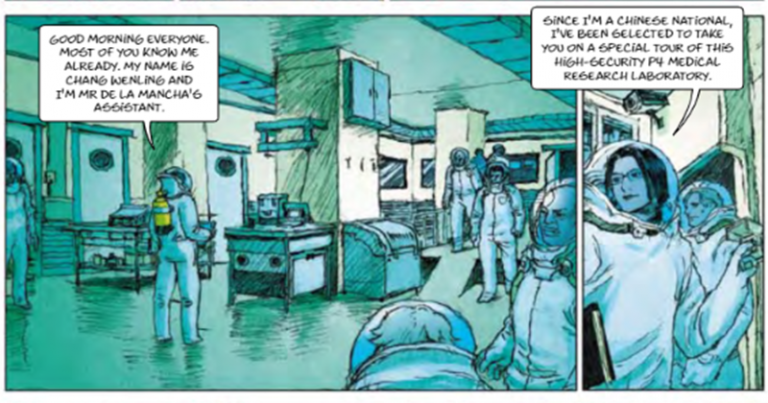 A strange comic book that was commissioned for publication by the European Union in 2012 eerily predicted almost exactly what has unfolded with the Covid-19 global pandemic. However, in this propaganda laced presentation of the outbreak, unelected globalist bureaucrats save the planet.

The comic book, titled ‘Infected’, was a production of the European Commission’s international cooperation and development arm. It was not intended for widespread public consumption, but instead to be distributed inside EU institutions. Only a few hundred of the comic books were made.

The EU’s description of the strange publication states that “While the story may be fictional, it is nevertheless intertwined with some factual information.”

The graphic novel depicts scientists inside a lab in China experimenting with deadly pathogens.

Also, one thing that #China is hiding is the number of death caused by the virus. Credible Chinese media outlet @initiumnews interviewed people working at local cremation centers, confirming that many dead bodies were sent directly from the hospitals to the cremation centers…