Who are you? Do you really know the answer to such a question? Should or could it be rephrased, Whose are you?

Whose? Yes whose, whether or not you accept that your life here will extend into eternity or not, it will. From the Biblical narrative you belong to either GOD, our Creator, or self & Satan. For this writer no other religious belief matters; as a Christian, my faith and hope is founded in Jesus the Christ, His sinless life, ministry, sacrificial death on the cross, & His resurrection from death.

The “who” is relative to yourself, your soul, & your eternal destiny. Who are you? A hedonist or a moralist? Are you thinking of yourself in a way which makes you better than this one or another?

“At least I’m not like him or her, I know better.”

“That person is such a liar.”

On and on it goes for the moralist, one who is comparing themselves with themselves. If you think your own righteousness will look good in the eyes of our Creator, think again.

In Isaiah 54:6. But we are all as an unclean thing, and all our righteousnesses are as filthy rags; and we all do fade as a leaf; and our iniquities, like the wind, have taken us away.
Take it from the prophets, all of our own self-righteousness is nothing before GOD.

For the moralist this is hard to fathom, their entire world is based on how good they seem to be, while believing their Savior approves of their ways in the end they’ll hear this:

Matthew 7:21. Not every one that saith unto me, Lord, Lord, shall enter into the kingdom of heaven; but he that doeth the will of my Father which is in heaven.
22. Many will say to me in that day, Lord, Lord, have we not prophesied in thy name? and in thy name have cast out devils? and in thy name done many wonderful works?
23. And then will I profess unto them, I never knew you: depart from me, ye that work iniquity

So who are you? Or Whose are you?

They’re coming for the children, read it here.

Congresswoman Michele Bachmann (R-MN) has a long history of disparaging the LGBT community, and it seems she is not done. In a radio interview this week, Bachmann claimed that the LGBT movement is trying to “abolish age of consent laws.”

Bachmann told Faith & Liberty Host Dave Garrison that there is an effort underway to “do away with statutory rape laws,” so that “adults would be able to freely prey on little children sexually. That’s the deviance that we’re seeing embraced in our culture today.”

New Jersey has become the fourth state to introduce a “gender-neutral” option on birth certificates following the introduction of a new law which will go into force Friday.

The Babs Siperstein Law, which derives its name from a New Jersey resident and the first transgender person to become a member of the Democratic National Committee, will allow residents to change their certificates to specify either “female, male, or undesignated/nonbinary.”

“Having a gender-neutral option will now give thousands of people in the state of New Jersey the power to self-identify,” said Amanda Babine, director of policy and programs at the New York Transgender Advocacy Group, as reported by NBC News. “We find this choice to determine their own identity leads to an increase in well-being for the individual and a push towards creating more inclusive communities.”

The strike by 70,000 auto parts workers in Matamoros, Mexico is beginning to affect production at US automobile assembly plants, raising the possibility that auto production across North America could be brought to a standstill.

US workers are reporting to the World Socialist Web Site that management is slowing production at General Motors and Ford assembly plants as a result of the strike. Production at Ford’s assembly plant in Flat Rock, Michigan will stop this week due to a shortage of parts caused by the walkout.

By courageously withholding their labor, the workers at 50 auto parts plants that have been struck in Matamoros, just south of Brownsville, Texas, could bring a major sector of the world economy to its knees.

The strike demonstrates the objective unity and class common interests of US, Canadian and Mexican workers. It is the answer of the working class to Donald Trump’s racist threat to build a wall between the US and Mexico and the nationalist poison spread by the United Auto Workers and Unifor unions to make American and Canadian autoworkers think that their enemies are their Mexican brothers and sisters, not the auto bosses and the capitalist profit system.

Matamoros workers are beginning to recognize their social strength. Yesterday, thousands of workers marched from their plants to the city plaza, chanting “Bourgeoisie, get out!” The strikers have issued a social media appeal for “all Mexican workers” to join them in a national general strike, which they are calling “A Day Without Workers.”

A section of yesterday’s mass demonstration marched behind the banner, “The union and company kill the working class.” Striking workers report that “everyone has read” the coverage on the World Socialist Web Site. 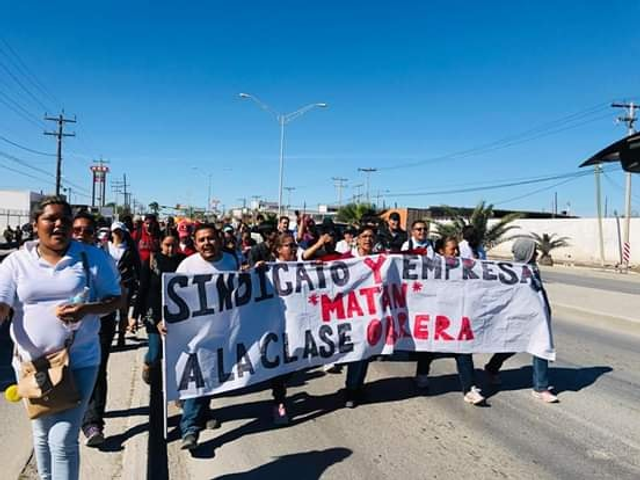 “The union and the company kill the working class”

There are indications the strike may spread. On Friday, the parts company Aptiv fired hundreds of workers in the border city of Reynosa for engaging in partial strikes demanding a 100 percent wage increase. The firings provoked outrage among the workers.

The eyes of a million maquiladora workers near the US-Mexico border—accounting for nearly two-thirds of Mexican exports—are on the struggle in Matamoros.

The strike shows that the international interconnectivity of the auto industry is a source of profound strength for workers everywhere. While the companies have used globalization to facilitate the hyper-exploitation of workers all over the world, the Matamoros strike demonstrates that workers at each center of production have the power to disrupt the whole machine of global for-profit production.

Tens of thousands of workers around the world are following the World Socialist Web Site’s coverage of the strike, and growing numbers are sending messages of support:

• A GM worker in Oshawa, Canada said: “The companies are trying to exploit all of these workers across the border. I’m sick of it! Canada, USA and Mexico do not deserve this. We are going to follow exactly what the Mexican workers are doing. Our union isn’t doing too much for us. You need to fight this fight, you need to win it. Keep your heads up.”

• A Romanian worker at Autoliv—one of the companies being struck in Mexico—told the WSWS: “The conditions in Mexico are an outrage. In Romania it is no good either. We work 12 hours for 20 euros a day. The unions are the same in Romania as in Mexico. They are little bosses. In Mexico and Romania we must get better, decent conditions.”

• A GM Silao worker in Guanajuato, Mexico agreed: “We have to do something similar here in Silao. This union is not worth anything.”

• An auto parts worker in Detroit, Michigan said: “I take heart that you are reaching across these illusory national borders to your working class brothers and sisters north of you and saying ‘an injury to one is an injury to all.’ We must stand together as a united global force. We will not let US-based companies hurt Mexican workers in the name of capitalism. You are our fellow workers, you just happen to live in a different country.”

The poll also found that voters prefer increasing spending on domestic programs over cutting taxes and reducing spending, and their preferred way to finance that spending is by taxing the wealthy.

Other polls have shown a similar move left from not only Democrats, but Americans in general.

More than 40% of men today suffer from it—and their loved ones pay the price.

It’s called “toxic masculinity,” and it’s the latest disease to plague the nation. It can affect every aspect of a toxic man’s life. Worst of all, toxic masculinity is contagious, so if you’re infected, you need to know right away so you can avoid spreading it to your friends and family.

Are you or a loved one suffering from toxic masculinity? Know the warning signs so you can seek help:

If you or your man are showing one or more of these symptoms, contact your medical professional today. Get help, before it’s too late.